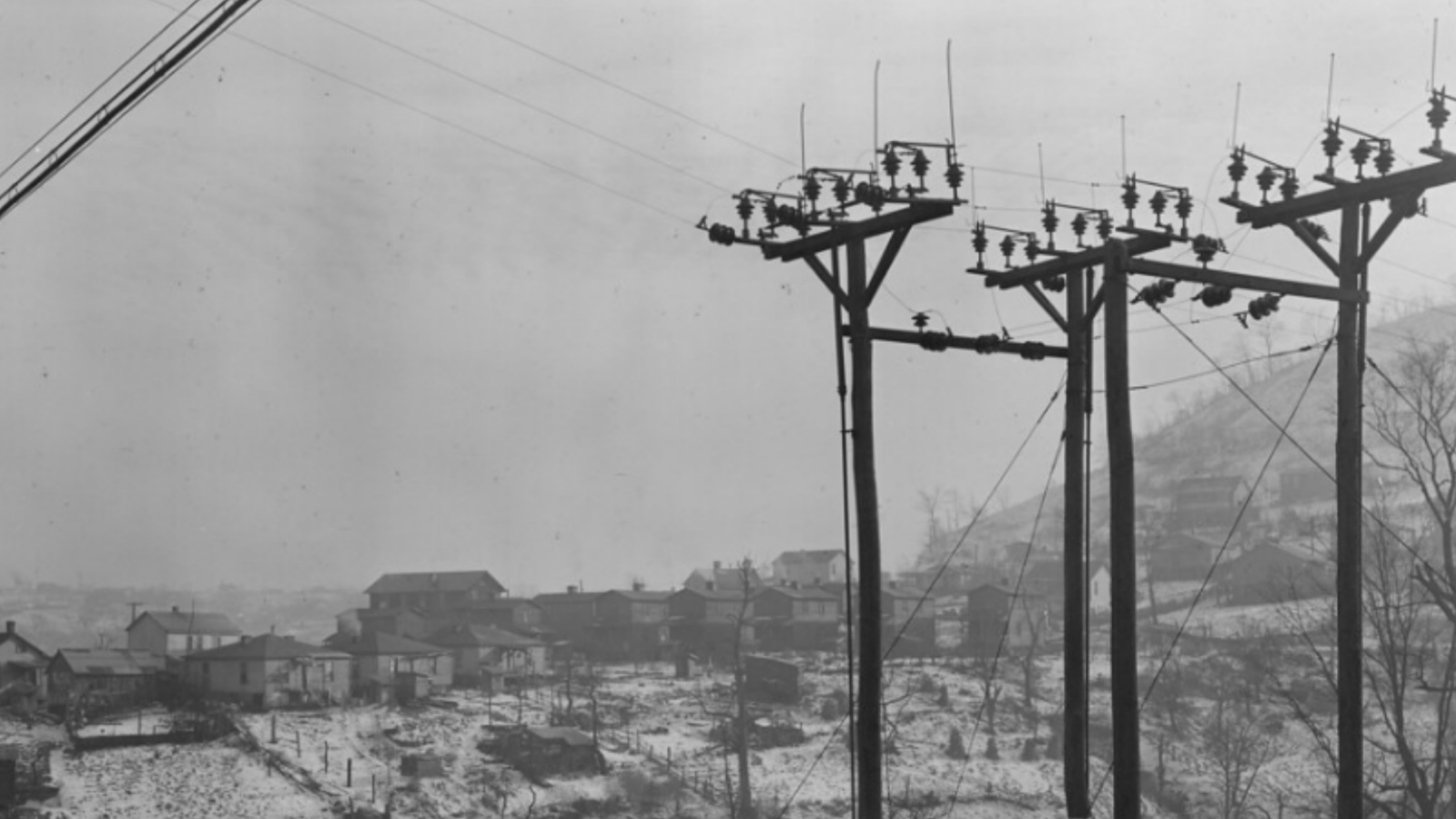 Since 1921, when the first electricity lights kicked off, until 1983 when full electrification was completed, the country has seen comprehensive developments. This is a story of energy development in six decades through exciting stories of those who played a key role. A small lightbulb, supplied with power from a small battery lit on the night of Eid Al-Adha in the Muslim shrine called the Mosque of Bosniaks in Ferizaj.

It was the year 1921. The Ferizaj residents were amazed: what is this glass that is lighting this place? The imam from Shkup was proud. “Finally the light has come to Kosovo as well”, he said proudly. This was the first electricity light lit in Kosovo, 97 years ago. This action of the Albanian man from Shkup prompted quick actions in support of electrification of Kosovo.

Everything started in Ferizaj and it continued there. A few weeks later, a steam engine which produced electricity was brought to the town. The steam was initially made with the use of fuel and later with coal, a process in principle similar to that of the present day power plants. Isuf Vata, 62, an officer in charge of the KEDS facilities in the Ferizaj District, and member of one the first families in Ferizaj, explains the production machinery.

Initially, it produced 6 kilowatts. It produced power for the city lights and lights in some houses. Two years later, the capacity was doubled and power was distributed through two parallel lines with 6 kilowatts each. Lights started to be introduced in the houses of important people in town,

Vata says. All this happened thanks to the many efforts of Sani Kagjaska, team leader, who had come from Gjakova to do this job. “He managed to develop that machinery and lit the first lights in Kosovo. He worked for years until 1957 when the then regime forced him to leave the country and move to Istanbul, where he died at the age of 93,” says Cakaj.

After the first lights and production of first kilowatts of electricity, the first substation was installed in Ferizaj. Known as Central, it was built in 1922, and stood there for decades until 1960s, when the town was connected to Kosovo’s electricity network. The Central was based near the town’s mill. It distributed power for Ferizaj, say the residents of the town that served as a railway key point for the country.

Today, the substation is no longer there, same as the mill. Today there is a barren land and another building which is known as the White House was built adjacent to it. A few months after Ferizaj started with electricity, Prishtina followed suit. Production of electricity in Prishtina started in 1922 through a locomotive which was also run by coal. Its capacity was 12 kilowatts. Similarly, it sufficed to provide lighting for the city and some important houses.

People were not allowed to use electric home appliances. The fines were huge if someone was caught plugging them in the circuits. The electricity was there only for lights, nothing more. It was the time when Kosovo was overwhelmingly a rural country without professionals in many fields, especially in engineering.

An important step was made in 1930s. Three small power plants started working which supplied main cities with electricity. Initially, in 1932, the power plant in Prizren was launched, which sufficed for public lighting and few houses in the city. The pre-war developments countinued several years later.

In 1938, the power plants in Radavc and Mitrovica started work, which supplied the cities of Peja and Mitrovica with electricity,

says Selman Gashi, a chairman for many of the Peja Distribution, now a retired engineer. “The capacity of the power plant in Radavc was two-180 kilowatt turbines, that is, 360 kilowatts in total, which was enough for public lights in Peja and some other consumers now and there”, Gashi says.

An electrification campaign continued until after the World War Two. Then, the campaign intensified, to start with full electrification of the country. In 1945, the ElektroKosova distribution company was established by the Assembly of Kosova. Electrification was again done through important people and they were given priority.

For instance, old local residents tell how Ferizaj was the leader in the country’s electrification but when it came to the modern network, a village of this municipality, Doganaj, had electricity network installed before Ferizaj. Ferizaj had to wait, because in that village there were important people from the central government living there. But at that time, there were villages that did not wait for the hand of authorities by acting on their own.

Residents of Llozhane of Peje had found a creative solution.They had a stream that supplied the local mill with water. They built a small hydro power plant there. During the day, they used the water for the mill, and during the night, to produce electricity provided lights for the entire village,

says Ekrem Belegu, an engineer who played a key role in electrification of the Rugova region. Electrification progressed rapidly in 1950s. Now, there were capable engineers in the country. Decentralization had already happened and funds were provided by the municipal budgets.

Construction of a genuine network started with the start of the work of Kozhnjer hydro-power (Lumebardh River), in Decan, in 1957. Its capacity was two 3.3 megawatt turbines, that is, a total of 6.6 megawatt. This sufficed to provide electricity for Kosovo of that time which literally had not had a developed economy, says Selami Gashi.

After the construction of the first important power project, the first 35 kilowatt line was also constructed to distribute power produced at that power plant. At the same time, the first segment of Kosova A power plant started work. It had a capacity of 60 megawatt which mainly produced power for consumption outside Kosovo. But, in 1960s, Kosovo economy saw a boost and the demand for power grew significantly. Many factories that needed energy were built. Households also saw a need for electricity.

In parallel with the launch of other capacities of Kosovo A power plant, started the spreading of network and the first 110 kilowatt lines were installed at that time. One of the engineers who was directly involved in Kosovo’s electrification is Osman Breznica. For many years, he led the Prishtina Distribution, and now he is a retired engineer.

It is impossible to describe with words the feeling of electrification. I have travelled many places including there where light was being installed in the houses and the residents surprise was immense. They simply became speechless,

says Breznica. He started with the process of electrification of Klina villages in 1970. “Enthusiasm was huge. Sometimes, we had to work late, and there were no trains for Prishtina. In those cases, we had to sleep in the houses of the locals. They welcomed us with the highest respect”. The 1970-1980 decade was the time when Kosovo marked the biggest progress in its history. In addition to the advancement of its political status and development of education, the country saw a significant economic development as well.

This was the decade when the biggest part of the country’s electricity network was installed. “People in charge of funds in Municipalities were telling us: do not stop your projects, because there is enough money, finish them all”, says Breznica. He speaks about another example of late 1970s. “We were involved in electrification of the Drenica region villages.

We completed electrification of Aqareva, but there was not a single bulb in the whole village to test the first light. Fortunately, I kept one in my car. And, when the first lights were on in that village, the experience of the locals was something to be remembered. They simply were amazed. This happened 40 years ago but it looks to me as if it was today. I would not have wished to be in any other place of the world at that time,” says Breznica.

The village that did not have a single bulb to test the electricity today has no less than 8 substations. After Drenica, the Kosovar teams continued electrification of the villages in the north, up to Rashka. Breznica was also part of that team, which in addition to Kosovo, had installed electricity in many parts of Serbia and other regions. The process of Kosovo’s electrification officially concluded in 1983 with installing of electricity network to the Rugova villages. It was a huge celebration with almost all important dignitaries of the country being there. The protagonists of this story were also part of that celebration.